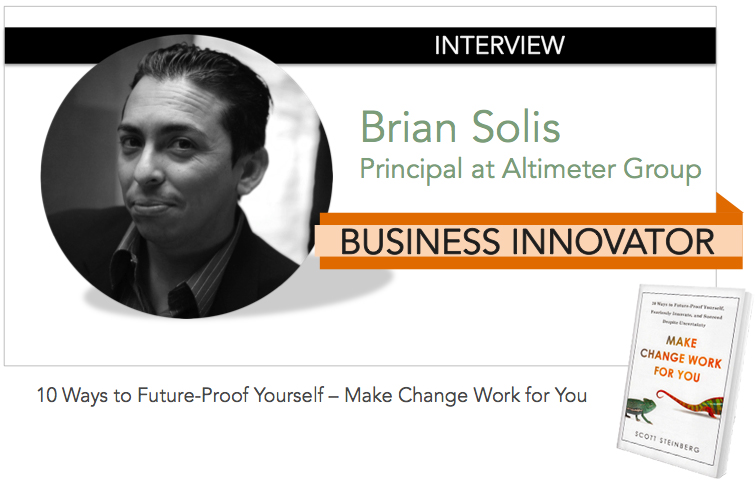 Question: You’ve been tremendously successful in your career. Would you call yourself an overnight success?
Brian Solis: In 1991, I joined an advertising technology firm in Southern California as a database architect. I was building these efficient databases around a paper-based system, which their PR team used to track analysis and publications for media buying. At the time, I was sort of in awe of how little my colleagues knew about technology, and its impact on business. So I went to the president of our agency and asked if I could help add a technology perspective to some of our marketing programs. Shockingly, he said yes. That’s where it all began.

While I didn’t go to school for marketing, I knew what technology could do and I was very motivated by the performance metrics used in traditional marketing. Eventually, I was offered an opportunity at a big PR firm in Silicon Valley that was too good to pass up. I didn’t know much about PR, but I offered unique technology perspective and that led to some unconventional success.

Q: You said you were programming, were you self-taught?
BS: I taught myself when I was a young kid. I was mowing grass to buy my first PC, and I lived through the dot-com rise, where the real opportunity was working with big corporations like HP and Xerox or at startups.

Q: How did you survive the dot-com bubble and the subsequent downturn?
BS: There wasn’t as much demand during the dark times. You had to be creative. You took your retainers, but you also had to show that you would deliver dividends. There was an emotional element too, I went from 40 to 20 people and it was heartbreaking. In order to keep yourself going, you have to fight another fire — mine was a passion for changing the world of marketing and business. I probably don’t look back enough because I’m always moving forward quickly.

Q: Do you think that’s the case for most people,  that the corporate ladder is straight up or is it more of a zig-zag?
BS: It’s not a ladder designed to go one way. You have to go up and down and across. As a young adult, maybe your dream is one thing and it’s something different later. Happiness is not defined the way it was for our parents, and I think younger people are starting to realize that. We’re living in an economy where people aren’t even buying cars anymore. They’re not buying houses because they’re too ridiculously expensive, so they’re renting or subletting. There’s more freedom to explore what makes you happy.

Q: What has been the scariest point in your career?
BS: Failure is part of everything. You have to fail, and if you don’t, you’re probably not trying new things. The key is that you have to try enough so there are greater successes relative to the failures. Throughout my career, I haven’t thought of failure as scary, because I was on a mission. Once you start pushing for things to happen, you create your own destiny. That’s the truth. If you are pushing against a purpose, people will recognize that and support it.

Q: What advice would you give to someone who feels stuck in their career?
BS: I’m an introvert, and I still can’t work a room to this day. I’m not a good self-promoter. But one of my gifts as an introvert is the power of observation. Observe what is happening around you and decide where you want to be. Where I am now, and where I want to be, is separated by my actions and words. As an introvert, one of the things I learned by participating in online communities is there’s a sense of confidence that spills online into the real world. If you look at the true power of knowledge, it’s not just what you learn in the classroom, it’s the power of observation.