#MakingChange with Ann Handley – Rule #5 Master the Art of Improvisation 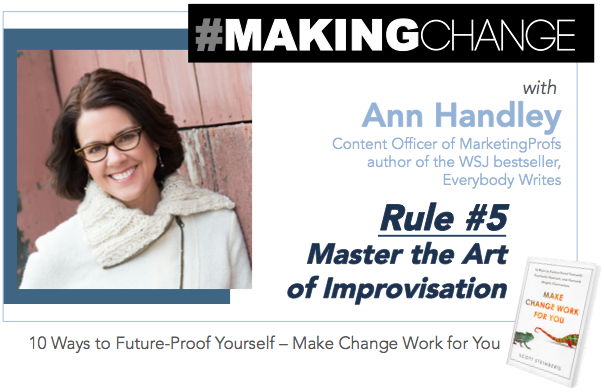 Finding the courage to embrace change and take chances is the only way to succeed. We’ve asked some of our favorite industry power players and business innovators to share stories of how #MakingChange worked for them, as it relates to the ’10 Rules to Future-Proof yourself, fearlessly innovate, and succeed despite uncertainty’.

Rule #5 Master the Art of Improvisation with Ann Handley – Chief Content Officer of MarketingProfs and the author of the WSJ bestseller, Everybody Writes

Question: What’s your background? How did you get where you are today, and what tips would you give others hoping to follow in your footsteps?

Ann Handley: When I was 8 years old, I wrote in my diary that I wanted to be a “writter.”  Eventually I learned to spell the word, and I became a writer, journalist, editor and (when the internet happened), a content publisher.

I worked at newspapers, magazines, and became the first Chief Content Officer at ClickZ (a company I founded in 1997). I now hold the same title at MarketingProfs. I write for fun at AnnHandley.com, and I speak all over the world.  I’ve always relentlessly focused on my audience. I try to make whatever I write or speak about a little clearer and more accessible to the people in the audience. I still do that now. In other words, focusing on others is a key to your own success. Ironic, perhaps. But true.

Q: What does being courageous in life and business mean to you? What are some of the biggest concerns and fears you’ve faced and how have you overcome them?
AH: Wow. How much time do we have? I was a shy, introverted, awkward child, with many fears – mostly irrational. (I detailed some of those fears here.)

I used to think that being afraid of everything was a weakness. Then I learned how to “follow the fear,” and use fear to my advantage. In other words, rather than letting fear derail me, I use the resistance to fuel my momentum, much the way the sails of a sailboat use the resistance of the wind to propel forward. The very things that scare me most are quite often also the things most worth doing.

Q: Describe “mastering the art of improvisation” in your own words. What are ways in which you have exemplified this rule in your life or career?
AH: Improvisation is about accepting what you have and working within those constraints or boundaries, rather than fighting against them. My “follow the fear” rule above is an example of that.

Q: What’s the biggest risk you’ve ever taken in life or business – and what did you learn from it?
AH: Hmm. I don’t know that I could articulate a “big risk”. I think of a “big risk” as doing something dramatic, and I’m less about drama than I am about experimentation. So, I think my career has been a series of small risks.

Which isn’t to say that those small risks weren’t scary— many scared the bejeebus out of me. Leaving a secure job at the Boston Globe was a risk. Joining MarketingProfs in 2002, at a time when they only had a handful of subscribers and made no money was a risk.  Publishing my first book, Content Rules was scary. But publishing Everybody Writes was even more terrifying, because inherently, it was a more personal book. Would people scoff? Would they laugh? You never can be sure, can you? I think that’s a good thing, because fear can either paralyze you or motivate you.

Q: What’s the surest way to innovate and stay ahead of the curve, whether you’re a working professional, business, or even renowned thought leader?
AH: Listen more than you talk.

How have you mastered the art of improvisation? Use the hashtag#MakingChange to share your stories with us, and find them on makechangeworkforyou.com/blog.