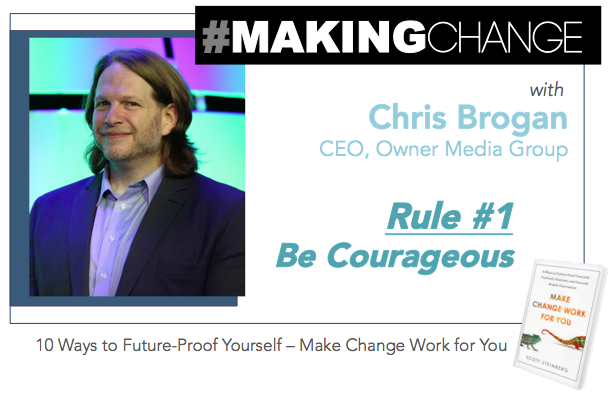 Finding the courage to embrace change and take chances is the only way to succeed. We’ve asked some of our favorite industry power players and business innovators to share stories of how #MakingChange worked for them, as it relates to the ’10 Rules to Future-Proof yourself, Fearlessly Innovate, and Succeed Despite Uncertainty,’ rolling out one new rule each week.

Question: Why is it more important today than ever before to stand out as a business, individual or organization? And is it really playing it safe not to do so given the rate of change and level of competition out there today?
Chris Brogan: There’s just so much “me too” going on in business. I was speaking with Nolan Bushnell, co-founder of Atari and the guy who gave Steve Jobs his first (and only) job, and he said that the amount of “same as” thinking that he sees as an investor and advisor is just depressing. We’ve decided that creativity is too risky. If that’s the climate, and if the people trying to make their business stand out are doing that at the core of their business, then being seen will be harder than ever.

Q: What does it mean to be brave in your opinion? And does it happen overnight or is it in fact a process of training and self-discipline that builds over time, i.e. through small simple action steps and habit-forming routines?
CB: Bravery is a process, a muscle, a verb. It requires action. To be brave, one must work daily on their confidence, their self-acceptance, their ability to grant themselves permission, and their execution. Doing means more than planning, and working every day on being true to yourself and accepting what has come before without dwelling on it will power one’s bravery.

Q: Why is it important to try new things, exercise different creative muscles, and – as Seth Godin points out – constantly be shipping or putting yourself out there? And how can people gain the confidence and strength to constantly be doing so?
CB: It’s astounding how many of us get into ruts. There’s nothing good about a rut. Our bodies adapt and then allow for atrophy and decay. Our minds do the same. It seems that entropy is the standard state, not just rest. So whenever you’re stuck doing the same old things, you’re losing ground in all ways. Yes, habits matter, but apply the habits to a variety of choices. Heck, I played bass in a band the other night. I don’t even play bass.

Q: Do you feel that it’s important to put yourself on a professional and creative workout routine and constantly be practicing, learning and improving, and stretching yourself? Why so/not? What happens if you simply do the same thing over and over again in your business or career?
CB: No question. If you’re not working on some lab time every day, you’re missing the best way to power up what you do. Experiment. Try. Learn from the outcomes. We’re so averse to failure. The thing is, change the word “failure” to “outcomes” and then accept that some outcomes aren’t what you want. Done.

Q: What are some common fears you see working professionals and business suffering from, and what are the costs they tend to have on these individuals and organizations? How would you recommend they react more intelligently to them?
CB: People are afraid of everything. They don’t want to stand out. They don’t want to take an action that might lose the company money. They don’t want to suggest that the status quo is boring. It’s amazing the levels of fear in an organization. What has to happen? Acceptance, bravery, the notion that those who will create what’s new will seem crazy for the first few years.

Q: Even for successes such as yourself, how important is it to constantly be failing and learning. Any anecdotes you could share that put things in perspective?
CB: I fail every day. Every single day something goes wrong, or I miss something, or someone says I never replied to them, or whatever. I fail ALL the time. If I’m not failing, then I’m not pushing hard enough.

Q: You’ve had to face down many fears and challenges on a professional and personal basis. What tips would you share with readers for facing down sources of anxiety and overcoming these possible roadblocks?
CB: Take the video game approach. When you show up in a video game, level 1 is all about figuring out the rules, the resources, the early strategies, the feedback, and the rewards. Everything from Pac Man to Call of Duty follows this mindset. So does life. Set yourself up at level one. Figure out the lay of the land, the rules, and figure out the feedback and rewards THAT MATTER (most people look for the systems that are in place and fall into that trap). Instead, make magic happen by figuring out the REAL feedback and then everything gets more cool.

Q: Faced with sources of fear such as potential layoffs, many folks tend to default to duck & cover mode, keeping their head down at work and trying not to rock the boat. Is that a smart and safe response in your mind, or is there a better choice to help minimize risk or gain more control over the scenario?
CB: Layoffs are the stupidest fear in the world. You WILL be laid off. It means that you have no idea where money comes from. YOU could make more than you make today if you were willing to own your life. To me, being afraid of a layoff is like being afraid of getting gray hair and wrinkles. That’s coming no matter what. Instead, work on it. If you have gray hair and six pack abs, the world will be happy. : )

Most business and people tend to go through the same routines day in and day out, whether making products or performing on the job tasks. Then, they’re suddenly disrupted when things shift. But could they have actually seen these changes coming, and done something more to prepare themselves in advance to meet these challenges? It seems a shame to wait for a mid-life crisis or market fallout to get scared into action via a wake-up call, or so we’d imagine.

Steve Jobs always sought to put himself out of business over and over again. In comparison, tons of companies whose names I don’t even know because they don’t matter try really hard to keep doing the same thing. Which do you want to be?

Q: What’s the single greatest fear you’ve ever had to face in a professional scenario and how did you overcome it?
CB: I’m always afraid that I’ve bitten off more than I can handle. I overcome it by learning my way out of the hole. I’ve tried to minimize this in the face of clients, but sometimes I’ll drag them along for the ride. Usually we both come out better. If anyone suffers, it’s me. I’ve done a lot of “duck swimming” (beautiful on the surface and horrible looking under the water) in my days.

Q: If you had to give any advice to professionals, managers and organizations at any level about dealing with fear, risk and uncertainty, what would it be?
CB: Learn how to have no boundaries. Learn how to have no enemies. Learn how to focus on yourself as the tool of business and not as a ball of ego hoping for praise and trying to dodge criticism. Once you remove those two sets of hooks from life, you’ll succeed more than ever before.

I work harder now than ten years ago. I suspect in ten years time, I’ll have even more challenges in front of me. If you want to sit back and relax, check out of life.