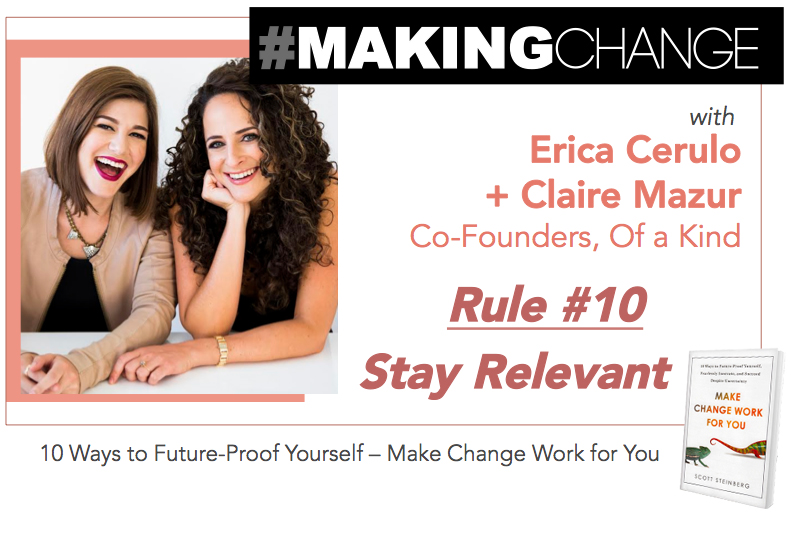 Finding the courage to embrace change and take chances is the only way to succeed. We’ve asked some of our favorite industry power players and business innovators to share stories of how #MakingChange worked for them, as it relates to the ’10 Rules to Future-Proof yourself, fearlessly innovate, and succeed despite uncertainty.’

Question: Tell us a little bit about Of a Kind. How did you get where you are today – and what tips would you give others hoping to follow in your footsteps?

Claire Mazur: Of a Kind introduces the products and stories of the most promising up-and-coming makers in the United States. In doing so, we expose audiences to the thrill of discovery and the sense of connection and intimacy that comes with being an early supporter of a young maker. We’ve been friends since 2002 when we met as undergraduates at the University of Chicago. We founded Of a Kind in 2010 after coming up with the idea for it over a rapid-fire, back-and-forth chain of 20-something emails in one night. We were so excited about it that it felt like we had no choice but to pursue it further. For months, we would meet after work in coffee shops and empty conference rooms and plot out our plan. We told everyone we knew what we were doing and asked everyone for help and advice. Our willingness to put ourselves out there and be bold when it came to asking for things was a big part of our early success. You can’t be shy.

Q: What is being courageous? What are some concerns and fears you’ve faced and how have you overcome them?

Erica Cerulo: I think that’s what Claire spoke to—really putting yourself out there—is one of the biggest things. You can’t be scared of “no”—of hearing it or of saying it. And, for me, getting comfortable with this has just come with practice. I’m definitely better at asking for what I want than I was five years ago before we started Of a Kind, and I think that has to do with 1) Claire’s influence—she’s way better at that stuff than I am!—and 2) forcing myself to flex that muscle and build it up.

Q: What does “staying relevant” mean to you? What are ways in which you have exemplified this rule in your life or career.

CM: I think it’s important to know what people care about—what they’re talking about, what they’re watching, reading, eating, etc. It lets you take part in the cultural conversation happening around you. Being able to make knowing references that people understand whether it’s about a food trend or a character in a book is an instant and powerful way to make yourself (or your brand!) relatable. Our “10 Things We’re Doing” newsletter, in which Erica and I each list 5 new discoveries, has forced me to actively seek out this type of thing. It’s a good exercise in keeping myself up-to-date on what’s happening around me.

Q: What’s the biggest risk you’ve ever taken in life or business – and what did you learn from it?

EC: For me, it was moving to New York after college without a job. I wanted to be a magazine editor—desperately—and I knew this was something that I needed to do in order to make that happen. I was bolstered by a conversation with the then-editor-in-chief of Seventeen, Atoosa Rubenstein, who assured me that it would be a pay-off…and that it would be shitty and emotionally draining along the way. All of that was true. I’m risk-averse by nature, and if I hadn’t ever made that move, I don’t think I would have had the nerve to leave that magazine job to start Of a Kind five years later—not a chance.

Q: What’s something no one ever tells people about what it takes to succeed?

CM: Nobody’s success story (or failure story!) is ever what it looks like on the outside. I always feel like the lowest moments of the company have been the same times when everyone around us is like “You guys are doing so great! You’re crushing it!” And it probably seems that way to them because they saw an article about us posted on Facebook or someone they know tweeted about us. But that’s never the full story.

Q: What’s the surest way to innovate and cut through the noise in the professional world, whether you’re a working professional, business, or even renowned thought leader?

EC: You have to do what feels right to you. You can’t pay too much attention to trend reports or what anybody else is doing. And you can’t be scared of things falling flat: The only way to know if something will be a runaway success is to try it in the first place.

How have you forged ahead in your life and career? Use the hashtag#MakingChange to share your stories with us, and find them on makechangeworkforyou.com/blog.