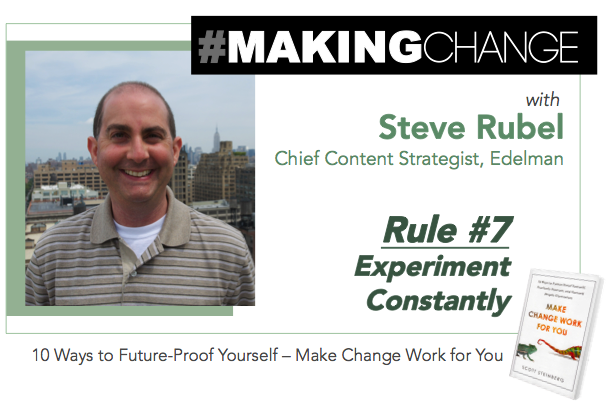 Finding the courage to embrace change and take chances is the only way to succeed. We’ve asked some of our favorite industry power players and business innovators to share stories of how #MakingChange worked for them, as it relates to the ’10 Rules to Future-Proof yourself, fearlessly innovate, and succeed despite uncertainty’.

Question: How did you get where you are today – and what tips would you give others hoping to follow in your footsteps?
Steve Rubel: As Edelman’s Chief Content Strategist I am charged with studying how digital content flows from the people who create it to the people who ultimately will consume it and how this impacts how companies must now communicate. Edelman is the world’s largest public relations firm, with more than 5,000 employees in 65 cities, as well as affiliates in more than 35 cities. My role is to help all of our employees and our clients connect the dots in new ways that ensure they will be heard.

I have been in the public relations field for 20 years. I joined Edelman in 2006 to help accelerate the firm’s embrace of social media as a new way for our clients to engage their various stakeholders. (In my prior role at another firm I launched some of the earliest social media programs in PR.) For the last three years I have been focusing on how our clients can embrace systems thinking to connect paid, earned and owned content programs into a memorable constellation.

I would advise others who want to do the same to find a great company to work for that will allow you to take smart risks in using digital technology to engage audiences in new ways.

Q: What does being courageous in life and business mean to you? What are some of the biggest concerns and fears you’ve faced and how have you overcome them?
SR: Being courageous means remaining focused and positive, even in the face of ambiguity. One of my concerns is that in my role there isn’t a clear path. I need to constantly redefine my role in the firm and my path every 18 months to two years. That’s exhilarating yet intimidating at the same time. But it keeps me fresh.

In 2004 I saw that the web was becoming a more democratized publishing medium thanks to blogging and what later became known as social media. I followed my gut and helped three clients launch social media programs, even though the audiences were tiny at the time. This fueled my own curiosity and eventually led to my current role at Edelman.

Similarly in late 2012 I began to hear from publishers that they were now open to distributing paid content from brands in the editorial feed. This later became widely known as sponsored content / native advertising. This was new for Edelman (our heritage is in earned and owned media), but with encouragement from our executives I spearheaded one of the first such programs in PR and was part of a team that helped expand our thinking about the role of paid media in PR.

Q: What’s the biggest risk you’ve ever taken in life or business – and what did you learn from it?
SR: Nearly 35 years ago I nearly lost my life to a brain tumor. At an early age this taught me to appreciate everything and take nothing for granted and I’ve lived this way ever since.

What’s the surest way to innovate and stay ahead of the curve whether you’re a working professional, business, or even renowned thought leader?

First, never be complacent. Be fearful that you don’t know what you don’t know. Second, never take anything for granted. View change as a positive not a negative because, as I’ve discovered, it can surface new opportunities. And finally, see the big picture. See and think about systems and how the pieces all fit together.

Have you experimented constantly in your life or career? Use the hashtag#MakingChange to share your stories with us and find them on makechangeworkforyou.com/blog.